On the 6 March 2015 Professor Graeme Gooday will give a public lecture entitled ‘Why Did Scientists Come to Write Autobiographies?’

The celebrity scientist publishing a best-selling autobiography is really rather a recent thing. Respectable Victorians like Charles Darwin did not publish about themselves: if they wrote personal testimony, it was usually only for their immediate family. In fact by convention a truly successful scientist would not waste time while alive drawing public attention to themselves by self-centred memoirs: rather they would wait for a devoted child, colleague or spouse to write a reverential if modestly candid posthumous “Life and Letters”. 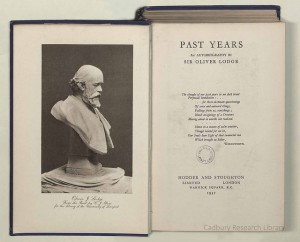 Why did this change in the twentieth century? The rise of the truly candid autobiography came after the First World War when many Victorian taboos and inhibitions were, for numerous reasons, abandoned or even shattered. In this talk I look at how some scientists after 1918 found themselves in unresolved controversies that looked likely to damage their longer term reputation. Rather than waiting for sympathetic obituarists (especially if none came) and to pre-empt potentially highly critical journalistic accounts, they produced sanitized versions of their lives rewritten to match the mood of the day. Scientific autobiographies, typically full of contradictions and doubts, usually made a partisan case to rescue their reputation impartiality and disinterestedness. And in the huge preponderance of male autobiographies in interwar science (the exception being Marie Curie) we see one reason why the image of the scientist as a highly literate omnicompetent male became truly part of our culture.

This lecture will be held in the Henry Moore Room, Leeds Art Gallery, 6 March 2015. It is free and open to all. To book a place, please email oliverlodgenetwork@gmail.com.

2 thoughts on “Public Lecture 1 (Leeds): Why Did Scientists Come to Write Autobiographies?”

This site uses Akismet to reduce spam. Learn how your comment data is processed.