On the 16 March 2015, Dr James Mussell will give the Cadbury Research Library Annual Lecture, ‘Civic Life: Oliver Lodge and Birmingham’, as part of the University of Birmingham’s Arts and Science Festival. 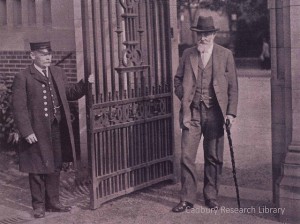 In 1900 Oliver Lodge, at the invitation of Joseph Chamberlain, became the first Principal of the new University of Birmingham. Lodge was Professor at Physics at Liverpool and, although wary, saw in the new university an opportunity to put his educational ideas into practice. Lodge led the University for its first two decades, but his tenure was mixed. He complained about the administrative burden, but successfully oversaw the establishment of the University at Edgbaston. These years brought tragedy, as Lodge’s youngest son, Raymond, died in the War, but also success, as Lodge himself become one of the most famous figures of his day. 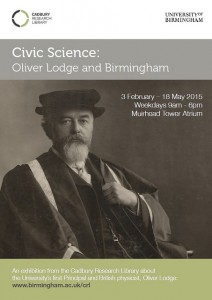 The lecture is free and open to all. To book a place, email special-collections@bham.ac.uk. For further details see the events page at the Cadbury Research Library here

This site uses Akismet to reduce spam. Learn how your comment data is processed.